Serving the Archdiocese of Chicago in Berkeley-Hillside, IL

During the month of February we celebrate Black History Month so the church will be decorated with Kente Cloth which is made of fabric of interwoven cloth strips. Kente is a visual representation of history, philosophy, ethics, oral literature and religious beliefs. The cloth was originally worn by royalty, but nowadays is used for special events. The Kente Cloth dates back to the 17th century, however, weaving tradition and colors date back to 3000 B.C. The patterns and colors have a cultural concept symbolizing creativity, respectability, experience, etc. Colors are related to meanings such as: grey-healing, green-vegetation, gold-royalty, red-politics, blue-peace and so on.

Witness to the Gospel- Black History 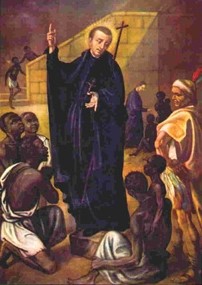 Saint Peter Claver was born June 26, 1580. He entered the Society of Jesus in 1602 and eight years later was sent to Cartagena, where he was ordained in 1616. The miserable condition of enslaved people aboard ships and in the pens of Cartagena, South America’s chief slave market, caused Peter to declare himself “the slave of the Negroes forever”; he dedicated the rest of his life to alleviating their suffering. Accompanied by interpreters and carrying food and medicines, he boarded every incoming slave ship and visited the pens, where he nursed the sick, comforted the distraught and terrified captives, and taught religion. Despite strong official opposition, Peter persevered for 38 years, baptizing an estimated 300,000 enslaved individuals. He also visited them on the local plantations to encourage their faith and to exhort their masters to treat them humanely; during these visits he often refused the hospitality of the plantation owners and instead stayed in the slave quarters.

The Knights of Peter Claver organization was founded November 7th, 1909 at Mobile Alabama; by four priests of the St. Joseph’s Society of the Sacred Heart. 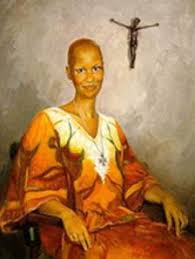 Sister Thea Bowman (1937-1990) converted as a child to Catholicism attracted by how Catholics loved and cared for one another, most especially the poor and needy.  For Thea, religion was real and relevant:  people put their faith into action.  At the age of fifteen, she joined the Franciscan Sisters of Perpetual Adoration moving to a convent in LaCrosse, Wisconsin.

She taught at all grade levels, eventually earning her doctorate and becoming a college professor.  In the turbulent 1960s, the country was confronted by the quest for justice and racial equality for all Americans. The liturgical renewal of the Second Vatican Council encouraged Sister Thea to rediscover her African-American religious heritage and spirituality.  She emphasized that cultural awareness is a prerequisite for intentional mutuality.  Eager to learn from other cultures, she also wanted to share the abundance of her African-American culture and spirituality. In 1978, Sr. Thea accepted an appointment to direct the Office of Intercultural Affairs for the Diocese of Jackson. In this position she continued to assail racial prejudice and promote cultural awareness and sensitivity. Facing grave family and health suffering, she left us the legacy of a life lived for the Gospel. She wanted in her tombstone the simple, yet profound words: “She tried.” “I want people to remember that I tried to love the Lord and that I tried to love them...” 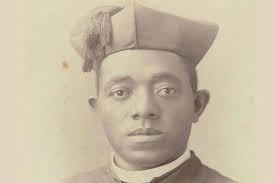 Father Augustine Tolton was the First African American Priest born in the U.S.

Augustine Tolton was born into slavery in 1854 in the state of Missouri. His slave owners practiced the Catholic faith. They saw that their slaves were baptized, given Christian names, and instructed in the faith. During the Civil War when Augustine was a child of 9 or 10 he escaped along with his mother and several siblings across the Mississippi River to the town of Quincy, IL.There the pastor of the local Catholic church, Fr. Peter McGirr saw Augustine's deep devotion to Our Lord.He nurtured Augustine's devotion by seeing that he was instructed to receive the sacraments and continue with his education through highschool and  graduation from Quincy College.

Augustine desired to become a priest,but no American Seminary would accept him because he was black. Fr. McGirr again came to his support and encouraged him to study for the priesthood in Rome. Fr. Augustine Tolton was ordained in Rome in 1886.

Fr. Augustine had hoped to be a missionary to Africa, but instead was sent back to Quincy,IL. After enduring several years of racial hostility he was transferred to the Archdiocese of Chicago. There he became the pastor of St.Monica's, the parish that served the African American population.As pastor, Fr. Augustine worked tirelessly to feed the hungry, visit the sick, tend to the poor,and preach the Gospel. He brought many to the Faith. He affectionately became known as 'Good Father Gus'. He died from heatstroke in 1897.

Both the diocese of Springfield and the Archdiocese of Chicago have advocated for his sainthood for the past 2 decades. In 2019 Pope Francis placed his name on the candidacy list for sainthood.